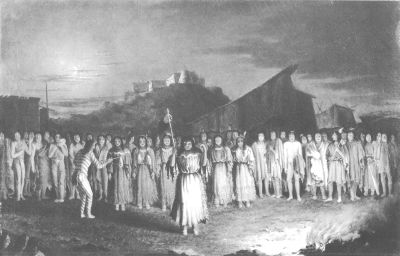 The following letters were written in appreciation for the man who wrote the book, The Spokan Indians. His friendships and scholarship seal his place among the people of the Interior Plateau. He drew on and recorded their past to preserve it and to share it with their many descendants.

“Quietly they go, the intelligent, the witty, the brave.”
Edna St. Vincent Millay

John Ross left this world in October. We would like to pay tribute to John, and thank him, and his wife Julie, his two sons, Michael and Justin, and Justin's wife, Lizzie, and their two dear children, Levi (4) and Annie (1), for John's presence in our lives, and for the ethnography of the Spokan Indians published by his son Michael, in 2011.

An ethnographer's job is to gather the facts and write them down. In doing his field work among Plateau cultures, and specifically among the Spokan, John said he, “felt like a grandson listening to his grandparents.” His work in ethnography became “not only of the head, but of the heart.” Most touchingly and true, he said, “I didn't do it for myself. I did it for the old people — people who had lived successfully for 13,000 years. They asked me, 'John, will they ever know these things? Will you write them down for us?'”

And he did. He “had learned,” in the words of another anthropologist, “from the people how to fit quietly into another culture, how to ask a useful question, when to remain silent, and how to yield control to circumstance and simply be there.” (Chris Rainier, Where Masks Still Dance: New Guinea).

In John's own words: “In writing this [book], every attempt was made to report accurately on what was told to me by each elder, without making any conjectured interpretations or conclusions.” Another author, observing John's approach to ethnography among the Spokans, wrote recently: ”As Ross and living descendants point out, there remain volumes of cultural material and stories that are not included in this book. Those same descendants think that the elders who befriended John Ross imparted their knowledge specifically for the Spokan people, and hope that they learn to use it. No matter what angle future generations use to approach their Spokan world, they will find Ross's contribution to be a central resource, and each page brimming with the energy of true and dedicated hearts.” (Jack Nisbet).

And those 'volumes of cultural material' the descendants mention, remind us of something John said a year before he left this world, when asked if there would be a sequel to his book on the Spokans, because he continued sharing stories and information that clearly could have filled not only another book, but an encyclopedia!

The 'sequel', John told us, was 'written' at night when he turned in for rest, which, for the last few years, was often elusive. “Who,” he asked while lying awake, “shall I interview tonight? And, one of the old ones would come to mind and we would have a visit.”

Now we include Ross among the 'old ones' whom we wish we could 'have a visit'.

John, our mentor, friend, and informant, shared a bond of appreciation for the traditional ways of a people he deeply admired and cared for. Even though his bloodline did not match those of the indigenous Plateau people, his heart and mind resonated with their hearts — theirs, whose ancestors lived so intelligently along the river and its tributaries, the plateau, and the mountains, of Interior Salish country.

He's left us. But he left much, including his Spokan, Kalispel, and Coeur d'Alene field notes from sixty-seven informants; his survey along the Spokane River identifying countless cultural sites needing protection, and done in preparation for the construction of the proposed Spokane River Centennial Trail — his field work, expertise and documentation of information gathered continues to protect these sites. He wrote the 17-volume Ethnoarchaeological and Historical Survey of the Spokane Indian Reservation 1991-1993. [There is concern that the only set in existence is no longer intact, nor even remains in the archives at Wellpinit.] His survey of the southern and eastern boundaries of SIR has been cited in regional and federal court cases on behalf of the Spokans. The above-mentioned projects are only a few of the ones he worked on and completed, and prepared him to be the most qualified writer of The Spokan. Truly, he left us much!

As we say farewell to this wonderful man, we close by borrowing an expression from the ancestors, which is recorded in his ethnography:

I'm already missing John Ross, who shared a tremendous amount of traditional knowledge with the rest of us. I'll never forget his voluntarily driving me in winter to East Omak to introduce me to Mourning Dove's brother, Charlie Quintasket! Lukim yu bihain. Oh my, I'm so sad to lose him.

You did good, John.

I honor the man. He was a really good man. I respect all he did for the people and for my grandparents.

In passing, on October 15, 2013, John Alan Ross, Anthropologist Emeritus at EWU, has left a wonderful legacy to the whole Spokane Tribe and to the world. He wrote the 13,000-year history of the Spokane People before the white man came. It's called The Spokan Indians. He wrote it for all of you. It took 40 years, and he collaborated with your grandparents and great-grandparents. They were not only his associates, but also his life-long friends. He respected them and the many students he worked with and taught.

Sam and I had the pleasure of many visits with him at our home. We will dearly miss him.

Your neighbor and friend,

John Alan Ross was my friend. I knew him as my friend and teacher throughout the last 30 years. We first met when Joe Flett requested that we move human burial remains on the Spokan River. Pat Moses, George Flett, myself, and others assisted in the removal of these remains. John Ross was the assisting anthropologist on site. John stated that we carried ourselves as our ancestors did. John talked about how our ancestors was buried in the fetal position with the head toward the sunrise and a cedar pole marking the burial. Some of the remains was buried with personal belongings such as women with their 'cooking rocks'. It wasn't long since I had buried my infant son when this event occurred. The bones that I had moved were of an infant with the pieces of a copper breastplate. John said they were possibly traded from Northern Canada. While scanning the area, John stated that there are probably more bodies that would come up because it was a large burial place. I met John at my Grandpa Norbert and Grandma Christine Abrahamson's place at Ford, WA. When we would show up, he would stop his interviews so we could visit. John respected our ways. He told me once never to stand in an elders shadow. We use to shoot targets together when he would come to the house. I have not read his book yet but when I do, I will see many Spokan people… John and Agnes Wynne, Norbert and Christine Abrahamson, and many more elders. He did not tell me he was sick. He wasn't like that. I told him in our language to pray for the things he was asking for. He told me he understood and heard this before on the reservation. He was 80 years of knowledge, teacher, mentor, father, and husband. The last conversation we had, he said “cheers”.

Til Our Spirits Cross Again…

Even as we weave the tapestry of the future, the fabric of the past is unraveling, strand by strand. Recently one of those strands that tied us to our past passed on. Our people lost a staunch ally, a friend of the old people. Our friend John Ross has moved on to continue his spiritual quest through the mystery of death.

To view John's life one would think they were watching a wanderlust life, from back east to New Guinea to us. He seemed to find the balm to sooth his spirit with our old people. I believe kindred spirits seek each other out. John entered our world at a time of loss - some of us watched the old ways disappearing, some of us wondered but didn't have the right questions. John stepped in to be a bridge between the Elders and the children yet to come. John instilled in us the will to begin the protection of our heritage.

Lucky for us John and our elders could envision a common goal in the preservation of their culture, our way of life. Together they created an ethnography for our children. Together they found a way to secure this knowledge for the future.

I, for one, will truly miss this man. He was from the mold of when a man's word was worth gold. John treated the world with respect, expecting recipricol respect.

He did not suffer fools. If a kettle was black he called it so, not a dark shade of grey. The world is a poorer place without John. I will cherish the conversations we had. My world grows smaller everyday.

I'll never forget the time John stopped by to chat. My cousin Don was visiting when John came in the door. We were sitting at the dining table so John proceeded to sit down, taking his jacket off, revealing 9mm pistols under each arm in shoulder harnesses.

John began regaling us with a story on how he had just had a run-in with a 'pencil-neck' in a grocery store parking lot. Apparently some guy was shoving a woman around in the parking lot so John gave him some lessons in etiquette. John, the world needs more of you, instead we get less.

Go on your journey my friend, keep a place by your camp's fire for me.

I thank John's wife Julie for sharing her man with us and we share her sorrow.

Protect all of your online browsing and downloading, and also block ads and tracking, with Windscribe VPN.

You can get online space for your future or existing website with the terrific hosting service that I use.

It has been a pleasure working with you so far. Thank you Michael. Looking forward to continuing to do so!
M. G., St. Cloud, MN, aquarium marketplace entrepreneur

New articles and book reviews are announced on RSS. We also can connect on LinkedIn.